The rover ant, Brachymyrmex sp. (Figure 1), alate swarms have been a seasonal nuisance at some of Hawaii’s golf courses for the past several years, especially at Hualalai Golf Course / Resort on Big Island. Colonies are mainly formed in soil underneath turfgrass, bases of trees, and in leaf litter, etc. Alate swarms, attracted to objects in bright colors such as white/yellow shirts, throughout the warm summer months drive golfers off the course, as mating flights usually occur from May to August.

Several entomologists and ant experts have been consulted to review the situation. Major observations and findings prior to this research are briefly summarized as below:

This research aims to identify effective means to control rover ant, Brachymyrmex sp., at Hualalai Golf Course / Resort, which has been negatively affected by this nuisance turf pest. The golf course superintendent at Hualalai golf course received many complaints from golfers over the years, and is positioned to resolve this situation. In recent observations and communications with several other golf course superintendents, golfers, and home owners, it became apparent that this nuisance ant pest had affected several other golf courses in Hawaii, possibly at Ted Makalena Golf Course, and more. Therefore, this research will not only benefit the superintendent at Hualalai Golf Course / Resort, but will also bring broader benefits to other affected golf courses in Hawaii.

The overall objective of this research is to test the efficacies of several newly developed granular ant baits against the rover ant, Brachymyrmex sp., both in the lab and in the field. Specifically,

Objective 1: To determine which ant baits to be included in the field trial, based on lab tests.

Objective 2: To determine the efficacies of selected ant baits against the rover ant, Brachymyrmex sp., in field trial at Hualalai Golf Course / Resort.

Several relatively new granular ant baits were tested in this project, including Maxforce Complete (by Bayer), Advance 375A (by BASF), Sieta (by BASF), and Intice (by Rockwell Lab), with and without sugar amendment.

Objective 1: To determine which ant baits to be included in the field trial, based on lab tests.

Seven baiting treatments were tested in the lab to determine which were to be included in the field trial. These were Maxforce Complete (MC), Advance 375A (Ad), Advance 375A + Sugar (AdS), Sieta (Si), Sieta + Sugar (SiS), Intice (In), and Intice + Sugar (InS). The ratio of bait to sugar amendment was 1:1. A control without any bait was included in the lab test. There were 4 replications for each bait and the control. Therefore, 32 petri-dishes were used in the lab test. Five active Brachymyrmex sp. individuals were placed in each petri-dish. Some soil collected together with Brachymyrmex sp. was placed in each petri-dish to mimic the field environment. Attractiveness to baits was observed, and dead ant numbers were counted right after setup, and then at 18 hours, 30 hours, and 48 hours after these ants were exposed to the baits.

Objective 2: To determine the efficacies of selected ant baits against the rover ant, Brachymyrmex sp., in field trial at Hualalai Golf Course / Resort.

Based on lab test results, selected baits were included in the field trial at Hualalai Golf Course / Resort on Big Island, Hawaii. These were MC, AdS, and In. The field plot layout, including the check/control, was as below: 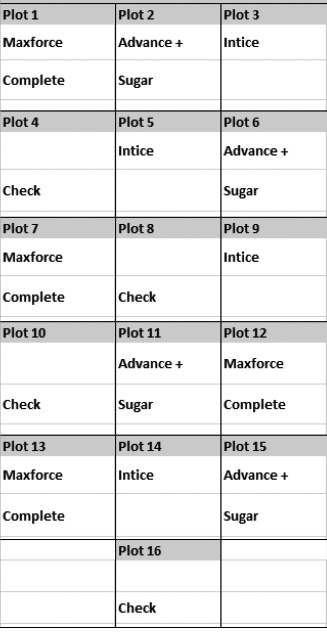 Each plot was 20 ft by 20 ft, and there was a 3-ft buffer area between any 2 adjacent plots to avoid cross-treatment contaminations. Baits were applied at manufacturers’ recommended rates, and irrigation in the field trial area was ceased for 3 days after baits were applied.

Four random spots (1.5×1.5 sq ft, 1 ft deep) were dug in each plot to evaluate Brachymyrmex sp. population density on the scale of 0-3, 0 being no ant at all, 3 being extremely populated with ant eggs, pupae, workers, and alates. Three people evaluated at the same time, and the average of three people’s ratings was considered the final evaluation for each spot. Initial Brachymyrmex sp. population density was evaluated prior to treatments. The same three people did post-treatment ratings at 2 weeks after treatments. Data were subject to appropriate statistical analysis.

As briefly mentioned in Materials and Methods, Maxforce Complete (a.i. 1% Hydramethylnon), Advance 375A + Sugar (a.i. 0.011% Abamectin), and Intice (a.i. 5% boric acid) showed the best overall baiting effects in the lab tests. Maxforce Complete, Advance 375A + Sugar, and Intice resulted in 60-90% mortality at 48 hours. Therefore, these 3 granular baits were included in the field test.

In field trial, however, we did not observe similar results as in lab tests. Figure 2 below shows the ant infestation reduction 2 weeks post treatment. Only Intice shows minor efficacy compared to the untreated control. This result is somewhat unexpected, but not unusual as sometimes lab test results do not match well with field test results due to uncontrollable factors in real world situations.

With additional support from GCSAA, we will continue exploring possible means to control Brachymyrmex sp. issues. Some additional granular ant baits will be tested, such as Distance (by NuFram), and modified Intice (with different a.i.), and others. A granular ant bait with fipronil as active ingredient (such as Top Choice by Bayer) will also be tested if permission from Hawaii Dept. of Agriculture is obtained. The research approach will be similar, i.e. conducting lab test first, and then field trial. Repeated applications of selected ant baits may be conducted and field efficacy tested.

In addition, we will explore the possibility of suppressing mealy bugs in the turf area and test if that will result in lower Brachymyrmex sp. population. For this approach, we will include popular insecticides for mealy bug control, such as TriStar, and others.

Funding from HGCSA, GCSAA, and Z. Cheng’s Hatch and Smith-Lever projects at CTAHR UH Manoa made this research possible. We also thank staff members at Hualalai Resort for help with field trial, and graduate student in Z. Cheng’s lab for help with lab test.