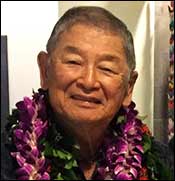 As Clarence Nakatsukasa approaches his 80th birthday, he is closing his latest career, presumably so he can play more golf.

Fittingly, the Hawaii Golf Course Superintendents Association awarded its executive director a Lifetime Achievement Award at February’s annual golf Ho‘olaulea. Nakatsukasa will retire as ED the end of this year.

He will retire again. The award was given for his service to Hawaii golf, his country and community. There have been several retirements.

Nakatsukasa graduated from the University of Hawaii in 1959 with a degree in history. Then he set about making some.

His Army career covered the next 20 years and he retired — for the first time — as a major. Military awards included the Legion of Merit, Bronze Star, Meritorious and Commendation Medal and Vietnam Campaign and Service Medal.

His golf game also was impressive.

“Golf gave me a lot of opportunities,” Nakatsukasa recalled about his military days. “I met a lot of people, played courses all over the world — on the mainland, in the Far East and Hawaii. The game really helped me in my career so I’m trying to give back. That’s why I’m still doing it.”

When he came home, Nakatsukasa was a Personnel Management Specialist with the Army Corps of Engineers and at Pearl Harbor Naval Base, along with Administrator for COMSAT, a satellite communications company.

His golf career — basically his third career — wouldn’t start until 1988, when his kids were out of school. He was a starter at Ala Wai and Golf Operations Assistant at Ted Makalena, then at Pali.

In 1994, the history major accepted the position of Golf Course Superintendent at Ala Wai, one of the busiest courses on the face of the earth. A year later, he began serving on the HGCSA board of directors.

Nakatsukasa’s training for his new position consisted of a huge course load ahead of time and hours of reading course maintenance material. He talked early and often with his new peers, along with suppliers of everything from equipment to fertilizer.

“I learned a lot from them,” he recalls, “and experienced a lot on my own.”

There was a lot to experience, with his assistant by his side. They usually showed up at Ala Wai at 4:30 a.m. and finished between 2-3 p.m. Nakatsukasa, who worked Pali simultaneously for eight “overwhelming” months, would be back on the weekend to play, and keep an eye on the place.

Along with the crowds, the flat course also has to deal with an abundance of salt in the soil, which causes bare spots. Its greens, which can be surprisingly good for a municipal course, are immensely difficult to maintain and nurture.

Along with everything else — for a multitude of reasons some courses face, and many do not.

“We’d be trying to do things to the golf course, but we’ve got so many people on it that it’s really hard to work around them,” Nakatsukasa recalled. “We had a lot of unhappy people when we’d close certain sections of the golf course. I always tried to talk to them and said, ‘Look, we’re trying to make it better for you guys,’ so they kind of understood.”

Ala Wai, with its legendary six-somes, not only deals with massive numbers on the course. It has relatively few maintenance workers, particularly in comparison to resort and private courses.

“The difficulty was not having the resources,” Nakatsukasa says. “Meaning primarily people and money and equipment. We have to make do with what’s available. We had to work hard and you had to get your workers convinced about what the job was all about, and why it was important to do the best you could.”

He sometimes still speaks about Ala Wai in the present, but he retired — again — 10 years ago. He quietly became the HGCSA’s first Executive Director. “For me,” he admits, “it’s a volunteer position.”

Golf must be a passion. He has worked too hard for it to be anything else.

“Maybe I’m crazy,” Nakatsukasa says. “I always felt along the way that golf was really good to me so I’m always trying to give back to something that did a lot for me.

“When I was playing and in the military I was a pretty decent golfer. A lot of people, I’m talking about generals and officers and members of Congress, I’ve gone out and played with them because I was involved in the game. That helped me in my career. Once I was done with that I needed to give back so that’s what I want to do now.”